This work is based on the Slayers RPG (found at gilarpgs.com), product of Gila RPGs, developed and authored by Spencer Campbell, and licensed for use under the Creative Commons Attribution 4.0 International license (creativecommons.org/licenses/by/4.0/).

Slayers of Suburbia introduces 3 new Classes, a new District, and 2 new Hunts for use with Slayers. A copy of that game is required to use these.

The Classes are the Urbanite, the Prepper, and the Gunfucius. The District is Suburbia. the Hunts are Cretaceous Skatepark, a mission about a mad scientist who wants to turn himself into a dinosaur, and Bring Down The House, an adventure that allows you to fight subcontractors with a crane and bulldozer. To be clear, you have the bulldozer, not them.

Suburbia is a surprisingly modern district of The City that disappears every night and reappears every morning. Unlike most districts, its location is consistent and predictable: it's always exactly 45 minutes from The City's center.

For each of the classes, a new Tactician Expert Advance has been added as well.

The Doomsday Prepper rolls 2d6 and deals damage to every creature – Slayer and Monster alike – they're Engaged with. When those dice rolls match, they fill up a can of Mincemeat that they can use to heal and stay in the fight.

The Gunfucius rolls a pool of dice. At the start of the game, that pool has 4 Gun dice of one color. For each hit, they deal damage to a Near monster. For each Miss, the die gets downgraded to a Fist die. Fist dice deal less damage to Engaged monsters, or get removed from the pool entirely on a Miss. As a Quick Action, they can upgrade dice from Fist to Gun, or re-add dice that have left the pool.

The Urbanite can wallop a single creature at Engaged range, or hit them for less damage, and Babe Ruth them out to Near range. As a Quick Action, they can erect Construction Projects that boost the effectiveness of allies or Move monsters to ideal locations.

The Cretaceous Skatepark is a 7-page, 3-act hunt that starts out with the Slayers tracking down a runaway teenager, and ends with them battling a mad scientist who's been turning people into dinosaurs. What more can I say?

Bring Down the House is a 4-page, 3-act hunt that has Slayers investigating the exodus of refugees out of Suburbia. Investigation reveals that an ambitious construction worker is destroying houses to build something, but no one knows why... Still, she must be stopped.

In order to download this Slayers Supplement you must purchase it at or above the minimum price of $7 USD. You will get access to the following files:

Support this Slayers Supplement at or above a special price point to receive something exclusive.

If you cannot responsibly afford this supplement at the listed price, please help yourself to a community copy, no questions asked.

If you are not sure if you would enjoy this supplement, please feel free to grab a copy, and consider buying one at full price if you find out that you do.

Slayers of Suburbia is absolutely delightful! Cretaceous Skatepark is hilarious and I laughed multiple times while reading. Definitely want to play/run that one sometime. 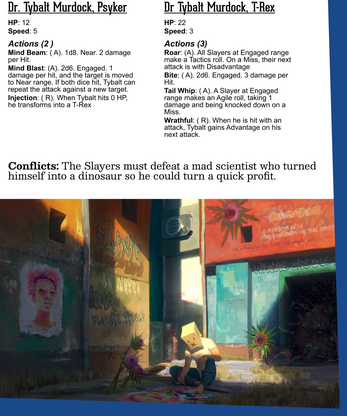