Unsure about Gratitude? Check out the Lite version, completely free!

Like what you see? Get it in print from Exalted Funeral!

The most interesting day of a person's life is the day when it ends. But this isn't a place for ordinary people. This is a place for the strong, the worthy, and those willing to compromise everything.

In short, Gratitude  is a storytelling game about trying to please an unknowable god-being in the hopes of being able to leave this terrible place. Once you die – and you will die – you might return as a Haunt, a pale shade of what you were in life. And you will turn against those you most recently called friend.

This is a game about losing everything.

This is a game about being grateful for what you have.

Gratitude was originally released as part of ZineQuest 2021.

Gratitude is a 60-page zine that includes elements of body horror and cosic horror. Players mix-and-match abilities from various factions and travel to complete quests, while sacrificing pieces of themselves that we so often take for granted.

Body horror involves violating the sanctity of mind and body. It is about reminding us that we are made of meat and can suffer terrible physical trauma. It is about flesh being torn off, displayed, and invaded.

This game may not be for you.

Years ago, something changed. The atmosphere itself became toxic to testosterone. The results were sudden and unpleasant.

The Culling killed 30% of people worldwide as the air turned against them. They choked on nothing all at once. Perhaps someone from a different vantage point could have seen a pattern, a trend...something. Maybe an Overseer knows. Or maybe it really was just cursed luck.

In any case, those who survived were left frail, impotent, and brittle-boned. Science solved the problems of reproduction, and mobility, and vast societal changes were immediately implemented to account for the Culled. But the damage cannot be so easily waved away. Many of the Culled who are left are human only by tradition— genetically evolved, selectively bred, and labratorially tampered with to evolve beyond whatever attributes the environment seems to hate. They are husks who survive with drugs and machinery, standing in open defiance against an atmosphere that hates them.

The world is ruled by unknowable beings known as Overseers, and most people believe that the only way to leave is to gain favor with these beings. Players can steal power from five factions, but each power requires a sacrifice. The factions are:

Years ago, Zebra Marks was able to procure a single female Golden Retriever for an Overseer. That dog, Bobbins, has since been cloned and bred for size. Each of the enormous dogs that roam the world are clones of that original dog. All of them love to play, and none of them realize how big they are. It is forbidden to harm or interfere with the dogs in any way.

As a reward for this deed, Zebra Marks now works as a tax consultant in a reality indistinguishable from Omaha, Nebraska in 1997. She thanks the Overseers every day for the banality in which she resides.

Gratitude uses a simple, hackable resolution system: in the middle of the table sits a d6. This is the Fear Die. Whenever you attempt an action, you roll a d6 and try to get equal to or greater than the Fear Die. If you succeed, the Fear Die increases by 1. If you fail, you take damage equal to the number shown on the Fear Die.

Death is rarely the end for characters in Gratitude, merely a setback. You can never die permanently without your own explicit consent. Rather, most of the time you make a sacrifice — your ability to hear out of one ear, a favorite memory, the names of your children — and you come back, resetting the Fear Die to one.

If you do choose death, your friends must fight the corpse that used to be you, and you return as a Haunt. You're not out of the game, rather you become an observer who can spend Haunt Dice to replace either the rolls of your friends, or the Fear Die itself.

Gratitude: a horror game is the product of people who have consumed media their entire lives. We probably aren't capable of properly identifying every inspiration, but some stick out:

The text of Gratitude is  licensed under the Creative Commons Attribution 4.0 International License. To view a copy of this license, visit http://creativecommons.org/licenses/by/4.0/.

This means you are free to copy, modify, or adapt this work however you wish, and even sell your creations as long as you attribute Idlewild Games.

The game also includes a Creator's Kit that can be downloaded for free. This kit contains a design guide with suggestions on how to build custom factions, lore, and adventures, as well as Filled With Gratitude Logos, templates for both InDesign and Affinity, and the attribution text all supplements need to include. Have fun hacking the game, and share what you make with me on Twitter!

In order to download this horror game you must purchase it at or above the minimum price of $15 USD. You will get access to the following files:

Support this horror game at or above a special price point to receive something exclusive.

If you are not able to responsibly purchase this game at the price listed above, please feel free to grab a community copy, no questions asked.

If you are not sure if you would enjoy this game, please feel free to grab a copy, and consider buying one at full price if you find out that you do.

We have physical copies available from Exalted Funeral now too! 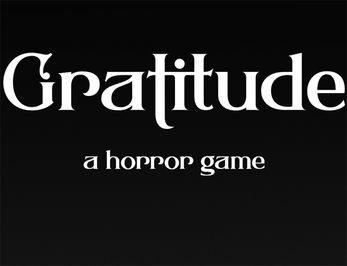