If you'd like a physical copy, send me an email (questions@solipstry.com)

Origins
Solipstry was originally created as an attempt to merge the best parts of D&D 4e (tactical combat, meaningful choices, a reasonable number of skills) with the best parts of D&D 3.5 (emphasis on roleplay, enough choices to matter, powerful abilities not restricted by class). Since then, it has shed its D&D roots and become a system of its own (You can still see these influences in some areas).

Mechanics
Solipstry does not have classes. It is a skill-based game, where every time you succeed in using a skill, you get better at using it. Because you can pick which skills to emphasize, you can make your own "class" by combining different sets of skills. You also have abilities, which cost points. How many points you have total is determined by one attribute, while their regen rate per turn is governed by another. No more having to judiciously manage your most powerful spells for the day!

For those that want a little more control, the Luck attribute allows you to re-roll dice, avoid fail-by-one scenarios, or just add a little more oomph to your damage when the time really matters.

Our damage system uses multipliers to maintain consistent averages, while emphasizing interesting effects. On a normal roll of 3d8, you have the most chance of getting around 14 points of damage, while 3 and 24 would be outliers. In Solipstry, we inverted those odds, so you are more likely to get an extremely high or low result, rather than consistently average.

Who is it for?

Solipstry is simple enough for beginners to grasp, but complex enough for veterans to wet their hands and stay entertained. Our goal was to give DMs the freedom and flexibility to create whatever world they want to make and tell their own stories. Solipstry can be played in ANY setting. We have mechanics that are flexible enough, without bogging you down with supplements and point-buy tales. Try it out!

For more information, see our 2016 Kickstarter.

Chronicle
The Chronicle is technically a collection of monsters, but it is in no way required to play. The Solipstry core book has everything you will ever need to play, including sample monsters and instructions on how to create your own. The Chronicle is mostly lore and descriptions about how you might bring various monsters to life in your own game world. It includes quotes from people who've fought bears, seen ghosts, and encountered stranger and more outlandish creatures, varying from Network Spikes seen while hacking, to reality-bending Errata, supervillains, and more.

In order to download this game you must purchase it at or above the minimum price of $6.78 USD. You will get access to the following files:

Support this game at or above a special price point to receive something exclusive.

If you cannot responsibly afford this game at the listed price, please help yourself to a free copy of the digital version. 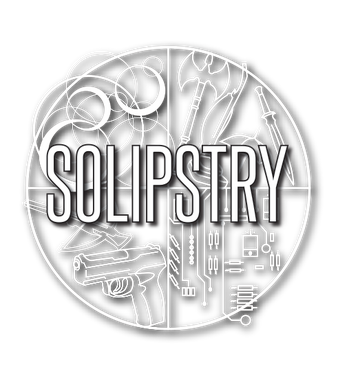